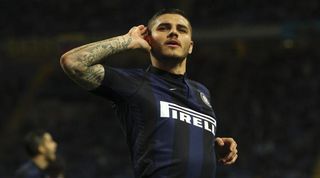 Speculation has been mounting that the striker could be a target for both Real and Atletico Madrid following a string of impressive performances since signing from Sampdoria in the close-season.

And, while acknowledging the presence of newspaper talk about Icardi's future, the forward's representative stressed that the 21-year-old is fully focused on his role at Inter.

"We are at a moment in the season when it is inappropriate to talk about operations in the transfer market," Abian Morano told Fichajes.com.

"Mauro is totally focused on the field and will continue to grow under the command of Walter Mazzarri.

"All these stories are inevitable, Icardi has a bright future ahead of him."

Speaking earlier this week, Icardi himself told Sky Sport 24: "I want to make my career here at Inter."

Icardi has scored eight goals in 19 Serie A appearances this season.