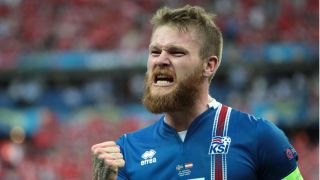 Iceland captain Aron Gunnarsson believes his side can take inspiration from Wales' success as they prepare to face France in the Euro 2016 quarter-finals.

Wales booked a semi-final against Portugal by beating Belgium 3-1 in Lille on Friday and Gunnarsson said Iceland are comparable to Chris Coleman's side.

Iceland will be the underdogs for their quarter-final against the hosts, but Lars Lagerback's men have already knocked out one traditional European powerhouse, England, on their way to the last-eight.

"Like we knew before the tournament, [Wales] were not favourites to reach that far and we weren't either," Gunnarsson told a press conference on Saturday.

"It's a joy to watch and I think Wales are a force to be reckoned with. They have got a good squad, good players and tough togetherness.

"They are showing a great attitude and desire to win football matches and it's something we can learn from them. We are also quite similar to them in that respect."

"We're not trying to be like Leicester," Gunnarsson said. "Leicester have done a fantastic job. They were the underdogs in the Premier League with all that money in there.

"We are not trying to be like any other team. We're just Iceland and it is our identity how we come towards the game and how we approach it. It's been fantastic to be part of this squad.

"Playing against bigger teams with the best players in the world is always going to be tough, but you're in this to test yourself. It's going be a big test for us tomorrow, but we're ready for it."

Paul Pogba is one of the France stars Cardiff City midfielder Gunnarsson is looking forward to facing, with the Iceland skipper describing the Juventus star as "superb".

"He is one of those players who is really superb. It's going to be a hard fight and I am ready to battle against anyone. It's been going alright until now.

"It's another game that we are ready for tomorrow."