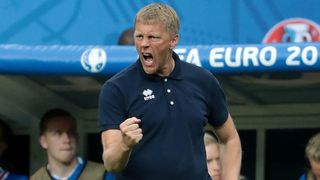 Iceland co-head coach Heimir Hallgrimsson joked his country might have to move its national holiday back five days to commemorate Wednesday's stunning last-gasp triumph over Austria.

Substitute Arnor Ingvi Traustason struck with the final kick of the game to secure a 2-1 victory, second place in Group F and a mouth-watering Euro 2016 last-16 meeting with England.

Hallgrimsson's staff and players streamed deliriously on to the field to begin wild celebrations among their crestfallen and eliminated opponents - scenes to fittingly capture the gravity of an astonishing underdog triumph for the tournament debutants.

"I would guess we will chance the national holiday from June 17 - that's what it means to us," Hallgrimsson, who will take sole charge when veteran Swede Lars Lagerback retires after the competition, told a post-match news conference.

"I would like to give Austria and [coach Marcel] Koller credit. They fought all the way to the death for the goal.

"To be honest we were lucky on occasions but we showed a fantastic mentality.

"There were a lot of tired legs at the end but we have said before that we are really proud of squad and our players and we have to give them a lot of credit in this game.

"We lost a bit of initiative midway through the first half. We won the game in the end but it was a rollercoaster."

There is now a dream tie on the horizon in Nice for the nation with a tiny population of 323,000, with Hallgrimsson conceding Icelanders are fanatic fans of English football.

"They are creative players with good individual players who can break up the game.

"They are a little bit of a different England team to before, so all credit to Roy Hodgson. They are a good passing team."

Hallgrimsson added: "I think everybody knows that Iceland has to have the perfect game. It's easy to say we have to score more goals than them.

"Even if Iceland has the best performance they have ever had we can still lose to nations and teams like England. That's just a fact.

"We have to play our very best. That's what we need to do."