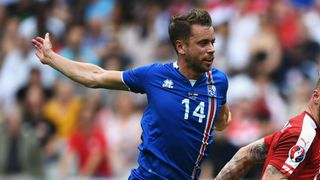 Kari Arnason has vowed that Iceland will meet England "with full force" after he starred in the 2-1 victory over Austria that clinched their place in the Euro 2016 knockout stage.

Group B runners-up England are next up for Lars Lagerback's side, and Arnason is confident that the competition's smallest nation can get a result against Roy Hodgson's men on Monday.

"I've always supported England in the big international tournaments when we haven't been playing," said Arnason.

"It's a dream come true. We're going to go into this game with full force.

"We go into the game to get a result. We believe in our ability."

Iceland go into the round of 16 unbeaten, having drawn 1-1 against both Portugal and Hungary before beating Austria, and Arnason paid tribute to the camaraderie amongst his team-mates.

"I can't really describe it," he said. "To do this with your best friends is fantastic.

"This is the feeling of all the lads in the group. We are a tightly knit group and what we have done is fantastic.

"It is extra fun to do it alongside my best friends and these supporters as well - 10,000 people from Iceland, it's unbelievable. It's like having your family at the game. I know probably 50 per cent of them."

Arnason flicked-on Aron Gunnarsson's long throw-in to tee up Bodvarsson for Iceland's opening goal, but the Malmo midfielder was tight-lipped on the thinking behind the set-piece.

"This is something we've trained for before," he said. "I'm not going to go into details. I want to keep secrets from the training ground.

"Of course we do have a few combinations."