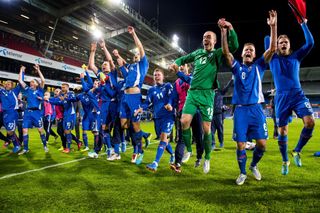 Iceland will host the first leg of their play-off against Croatia on November 15 before travelling to Zagreb for the return match four days later.

Lagerback is certainly no stranger to World Cups, having been to two with Sweden and one with Nigeria but taking Iceland to Brazil next year is a different proposition.

The nation boasts just 320,000 residents and were they to qualify from their play-off against Croatia, they would become the smallest nation ever to qualify for the World Cup.

Lagerback understands that his side go in to the match as underdogs, but does not see that as a disadvantage.

"You always have to feel that you have a chance and over a two-game qualification I think all teams have a chance," Lagerback said after Monday's play-off draw.

"I think the players believe in themselves and the way they are playing, so I think we of course have a chance to win even if we are the underdogs."

Opponents Croatia scraped through to the play-offs but sacked manager Igor Stimac in the aftermath of their qualifying campaign, with former national team captain Niko Kovac his replacement.

Kovac's first task is to right the wrongs of his predecessor and stated his main aim is to turn the players into a 'team' once again.

"I think the main problem was, there was no team on the pitch, we have so good players, but everyone was working for himself," Kovac said.

The former Croatian national team captain warned that Iceland could not be taken lightly.

"Iceland is a young team, they were second in their division, they have a coach with so much experience," Kovac said.

"I think it will be a hard match for us and we will prepare maximum."