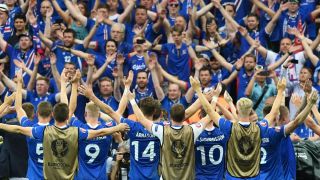 Elmar Bjarnason says Iceland are already intimately familiar with the enthusiastic exploits of cult hero commentator Gudmundur Benediktsson, as they prepare to put the motivational symbolism of a chihuahua chasing a rhinoceros into practice against England at Euro 2016.

Benediktsson's distinctive voice has been heard around the world as he ecstatically celebrated Arnor Traustason's stoppage-time winner in the 2-1 victory over Austria while on the air on Wednesday.

Although the extraordinary and unconventional broadcasting moment has become an instant viral hit, it is apparently nothing new to Bjarnason and his countrymen.

"Every time he is commentating he is very enthusiastic," he said.

"We are getting used to it. He's always like this when he's commentating on games. It's making games exciting to watch."

As for the general hysteria back home that has accompanied the team's success, he added: "Yeah of course, we've followed it. With social media you can't avoid it.

Boyhood Manchester United fan Bjarnason, who supplied the assist for the memorable goal in Paris, is looking forward to going up against England captain Wayne Rooney.

"If he asks me, I'll give him my shirt," he joked when quizzed on meeting the Red Devils' skipper.

"Of course, he's a great player and has been an important player for England for many years. He hasn't played his best game at the tournament yet and hopefully he won't against us."

In addition to motivational quotes from Albert Einstein, Bjarnason revealed Iceland have been inspired by a photograph of a tiny dog chasing one of Africa's largest and most powerful animals, a fitting analogy for the mismatch between the tiny Nordic newcomers and one of international football's tradition powerhouse teams.

"If you are underestimate us, of course it's a mistake," he said.

"But I think we've shown we can beat anyone, so we shouldn't be underestimated."