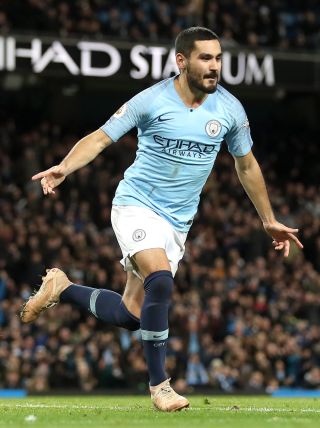 Midfielder Ilkay Gundogan believes Manchester City could have been even better in their first-half demolition of Manchester United.

Pep Guardiola’s tactics, playing Bernardo Silva as a false nine, completely confused their hosts and as a result they were 3-0 up in a dominant opening 45 minutes.

While United pulled one back after the break City were lauded for their performance but Gundogan said although they were good they could have been better.

A good result to take into the second leg, but there's still some work to do #CmonCity ⚽️🎱 #DerbyWinners@ManCitypic.twitter.com/7WrSmhQV50— Ilkay Gündogan (@IlkayGuendogan) January 7, 2020

“Especially in the first half, it was a special performance,” he said.

“We created so much and could have scored even more, but going in at half- time leading by three gave us a very good feeling.

“I felt on the pitch we could have done even better. Converting our chances better, maybe put a little bit more on top of that, but it was great.

“I don’t want to complain about our first-half performance, it was a joy to watch.

“That was important for the first leg, because it feels great to go home for the second leg with this result.

“It’s a great score for us, but it’s Man United so it’s not done yet. If we play similar, then I don’t think they will have any chance.”

United won in the league at the Etihad a month ago and that provided part of their motivation for the approach at Old Trafford.

“Obviously we were hurting – you can lose against this United side,” added Gundogan.

“They are still a great club, great team with great players, and have the quality to beat everyone.

“We lost that game, and our aim was to not lose twice in a row against them, and the reaction was great.

“We saw a few videos from the league game, and said to ourselves we want to do better. But I always starts from zero, a new game, a new challenge.”