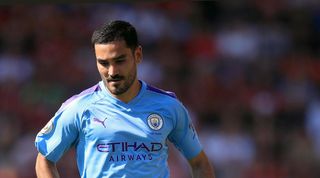 Manchester City midfielder has lifted the lid on what it is like to work with both Jurgen Klopp and Pep Guardiola.

Gundogan played for Klopp for four seasons at Borussia Dortmund, where he won a Bundesliga title, a DFB-Pokal and reached the Champions League final.

The Germany international was Guardiola's first signing as Manchester City manager in June 2016.

And Gundogan says he feels priveliged to have worked under two of the best coaches in the world.

"They are the two best coaches in the world. It is a privilege that I trained under both," Gundogan told Fantasy PL.

"I think there are a lot of footballers who are jealous of me are because they didn't have that opportunity.

"Both have a place in my heart. Both have taught me a lot and are part of my success."

Gundogan also suggested that he had the chance to link up with Klopp again at Anfield, but instead opted for a different experience at City.

"I believe in life's challenges and I always try to challenge myself.

"If I don't get out of my comfort zone, I will never change and never improve. I had four great years with Jurgen and I like him as a person and as a coach. But I felt that there was something new.

"I wanted to leave Dortmund in Dortmund and not think about spending time with Jurgen when I chose a new club. That was partly a reason for me not to go to Liverpool."

Guardiola's side return to action against West Ham on Wednesday, before a trip to Leicester next weekend.