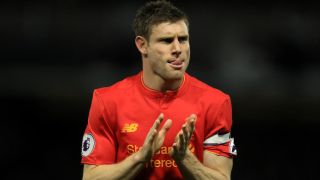 Liverpool vice-captain James Milner said he would feel "sick" if his team failed to qualify for next season's Champions League.

Milner had a second-half penalty saved as Jurgen Klopp's men were held to a 0-0 draw at home to Southampton on Sunday.

The result was a blow to their chances of a top-four finish, although they sit third in the Premier League.

Milner said he would be ill if Liverpool were unable to end the season strongly and finish in the top four.

"How would we feel if we miss out? Sick," he told UK newspapers.

"There was a lot riding on the Southampton game and I have to take the responsibility for missing the penalty. Hopefully we will get a bit of luck and finish the job. We have made improvements this year and we know where we need to improve again.

"We have shown on any one day we can beat anyone so if we could get in the Champions League we know we could be a match for anyone. We have got to do it consistently."

Liverpool sit third on 70 points, ahead of Manchester City (69 points), United (65) and Arsenal (63) – but having played at least one game more than each of their rivals.

Milner lamented his side's failure to beat so-called lesser teams this season, having dropped numerous points against opponents they were expected to beat.

"You look at the results all season. We have dropped points where you might not expect us to and there have been some disappointing games," he said.

"We do that job better and we are fighting for the title, never mind fighting to get into the top four.

"That is disappointing and we know it is an area we need to improve."

Liverpool finish their season with a trip to West Ham and a meeting with Middlesbrough at home.