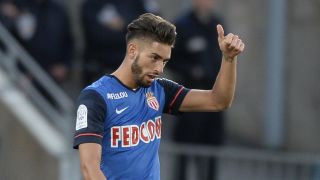 Atletico Madrid's latest signing Yannick Ferreira Carrasco is eager to make the most of his "dream" move to La Liga, but played down comparisons with Arda Turan.

The Belgium international made the move from Monaco to the Vicente Calderon last week, shortly after Atletico lost Turkish winger Turan to league rivals Barcelona.

Despite operating in similar positions with similar styles, Carrasco does not see himself as a direct replacement for Turan, as he approaches his maiden campaign in La Liga.

"I have not come to replace Arda Turan. I am a quick player who likes to play on the left wing," Carrasco told reporters.

"I will work hard to be a starter in the team. I love it here. Atletico are a very big team.

"I had played a lot in Monaco and wanted to take a step forward. Atletico is among the top three teams in the league and went a long way in the Champions League. We will try to stay in the top three and also see if we can win the league.

"It was an easy decision to come to a club like Atletico. Playing in Spain is a dream for me."

The 21-year-old also stated his eagerness to work with coach Diego Simeone as Atletico seek to once again challenge the dominance of Real Madrid and Barcelona.

"Simeone is someone I wanted to work with, he is one of the most important coaches in the world," Carrasco added.

"He told me he liked my ability to defend and also to attack in one-on-ones. I know he was a good player and as a coach he is one of the best. I wanted to be with him."