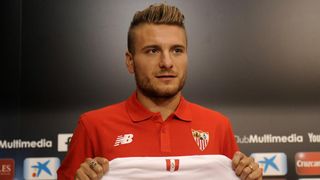 Sommella, however, told Radio Marte things could have ended differently if the former Torino front man had his way.

"We're happy to be at Sevilla," Sommella said. "Sevilla have won the Europa League twice, and are now in the Champions League, which makes you realise how important this decision is.

"Ciro, however, to tell you the truth, has talked about his bond with Napoli several times, but those sentiments were clearly not shared by the Partenopei.

"There's no desire to stir up controversy, everyone makes their own choices. We're talking about an Italian international striker, who is from Naples by the way, so it would have been a nice thing."

Immobile had netted 22 Serie A goals in his sole season in Turin in 2013-14, but failed to reproduce that form in Germany, making just nine league starts, scoring three times.