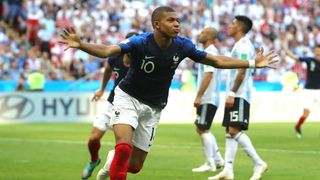 Perhaps the most remarkable thing about Kylian Mbappe's performance against Argentina was that, by his standards, it wasn't entirely remarkable.

Normally, such a devastating display in a World Cup knockout match by a 19-year-old would be followed by complete shock, then a whole host of articles detailing who he is and which clubs want to sign him. But Mbappe is not normal.

He has won Ligue 1 titles with Monaco and Paris Saint-Germain, the latter as part of a clean sweep of domestic trophies last season. He has played in a Champions League semi-final tie, already has 21 senior caps for France, and will become the second most expensive player in history when PSG pay €180million in the coming weeks as part of their deal with Monaco.

All this is not meant to make light of his performance in that 4-3 win in Kazan last Saturday. Quite the contrary, in fact: the post-match eulogies, the comparisons to Pele and Thierry Henry that followed, show that this was a very special showing indeed, even for Mbappe.

"Kylian attacked Argentina from the off," former Arsenal manager Arsene Wenger told beIN SPORTS of a player who, inevitably, he says he once tried to sign. "He was dangerous all match long and, when he was faced with a decision, he made it.

"When Kylian was 17 and playing for Monaco, his numbers were incredible. When the numbers are there at that age, it means that there is efficiency on top of very young talent. This proves that he is part of the group of five or six top players that will soon dominate the world."

The world might be a touch too soon, but he is starting to dominate the World Cup. Uruguay are next in line, in what should be Mbappe's biggest test at international level to date.

Friday's clash in Nizhny Novgorod sees the unstoppable force of the Parisian versus the immovable object of Diego Godin. The Atletico Madrid man has underlined his credentials as the world's best centre-back in Russia, a colossus on which a defence has been built that has conceded only once in seven consecutive victories.

Godin, Jose Gimenez and Diego Laxalt were exemplary in the last-16 win over Portugal. They won nine tackles and made 19 clearances between them, winning back the ball 10 times. It meant that, of Portugal's 20 shots, only five were allowed to be on target. Few of those caused Fernando Muslera in goal any trouble.

Lucas Torreira and Rodrigo Bentancur have also impressed, squeezing out any free space in midfield, the kind Mbappe exploited so spectacularly against Argentina. Godin is not blessed with pace, certainly not enough to keep up with Mbappe, but the solidity of the midfield in front of him makes it unlikely he will ever have to resort to the kind of clothesline move Marcos Rojo used to stop the teenager in his tracks.

This could be a tactical battle unlike Mbappe has ever faced before. Then again, for France's most prodigious talent in 20 years, it could just be another working day.