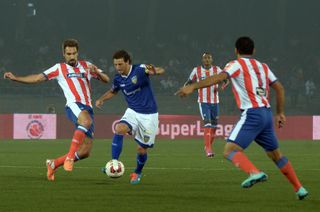 After a relatively poor first half, which saw Elano appear to pick up a calf problem, Mendoza gave the hosts the lead following some slick passing play involving the Colombian, Dhanachandra Singh and Balwant Singh.

Mendoza chipped the ball past Arindam Bhattacharya only for an unfortunate Eric Djemba-Djemba own-goal to level matters - the ball cannoning off the former Manchester United man and looping over Gennaro Bracigliano.

However, Bruno Pelissari restored the advantage for Marco Materazzi's men as the Brazilian substitute - a replacement for Elano - fired in from distance with the help of a deflection.

The lively Mendoza was forced off late on after pulling up with an apparent hamstring injury - right in front of the visibly frustrated Materazzi.

However, the former Italy international will have been pleased to see Jeje Lalpekhlua round off the scoring and wrap up the points late on - Balwant Singh providing a clever assist.

It moves Chennaiyin top by virtue of goals scored ahead of Kolkata while Pune sit fifth, just outside the Final Series positions.