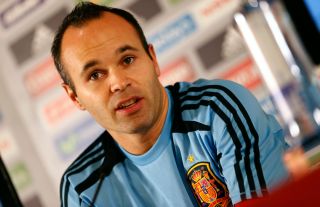 The stadium in Albacete plays host to Spain's final Group I qualifier for Brazil 2014 against Georgia, with the reigning world and European champions needing at least a point to guarantee their automatic spot at next year's tournament.

Progression to the finals is just about a fait accompli for Vicente Del Bosque's men, given the Georgians have not won an international fixture since September last year - losing seven and drawing three since a 1-0 win over Belarus.

And Iniesta said to be playing such a decisive fixture at the home of third-tier Albacete Balompie held greater significance to him, after growing up in the area.

"Once I knew the match would be here, I was very happy," Iniesta said.

"From now until the match finishes tomorrow, I'll be very emotional because when you feel this emotion, it fills you.

"We will try to enjoy this as much as possible, today and tomorrow.

"We want the fans to enjoy it as well because the national team doesn't often play here.

"We want them to see a great game and to see us qualify.

"This isn't a friendly match so we have to have our senses in tune for the game.

"On a personal level, there's no better place to secure qualification than here."

Despite scoring two goals in each of their past four outings since their 3-0 Confederations Cup final loss to Brazil in July, Spain have issues with their finishing - according to Iniesta - and must look to score early to take control of the fixture.

"We could be a bit sharper when it comes to the final ball and scoring, otherwise in these tight matches things can get difficult when the opponent grows into the game because they see we aren't finding the back of the net," Iniesta said.

"We have plenty of goal scoring talent.

"We'll be looking to take the lead from the first minute and make things as comfortable as possible for ourselves."

Team-mate Sergio Ramos said playing alongside Iniesta in the national set-up was an honour, given the Barca man's capabilities.

"It's a privilege for us to have a player like Andres who have made this such a special period in the national team's history," the Real Madrid defender said.

"Having someone like him representing the country on a sporting level is great, even more so when they are as fantastic a person as he is.

"We have a special fondness for people like him."