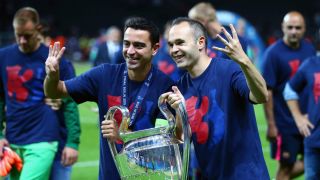 Barca eased into the last 16 of the 2018-19 edition after collecting 14 points from their six matches, winning four and drawing the other two to ensure they finished above Tottenham.

They will meet Lyon in the first knockout stage as they try to add to their five previous titles, the most recent coming in 2015.

Iniesta has been part of four Barcelona teams to have conquered Europe and he sees plenty of promise in Ernesto Valverde's current squad.

"I always think they can [win the Champions League]," he told Sport. "They're ambitious and with aspirations to win everything.

"After that, there are moments when things can go better or worse.

"This team deserves more Champions Leagues than they have won. I hope this season they take the step forward which has been lacking in recent years."

However, going all the way to the final in Madrid on June 1 will not be easy, with Iniesta expecting Manchester City and Paris Saint-Germain to push Barca close.

"It's difficult to think that someday they [City and PSG] won't come close in the Champions League," he added.

"The teams they have, their squads, the investments, the coaches... they should be fighting for the trophy.

"I also want to add Liverpool, who are looking good this year.

"The problem with the Champions League is that it's a really tough tournament. One bad day can knock you out."

Iniesta left Barca at the end of the 2017-18 season to ply his trade in Japan with Vissel Kobe and, despite enjoying life in J1 League, he admits part of him misses turning out at Camp Nou.

"I would love to be at Barca still if my body and head would allow it," he said. "I won't find anything to match this football club, this stadium, these team-mates.

"But I took another path and I am enjoying it. I am excited about what's to come and hope that this stage in my career will be important and special."