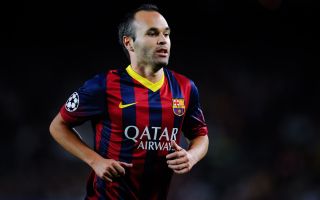 The 29-year-old has been the subject of reported interest from Premier League sides Manchester United and Manchester City amid rumours talks on a new deal had stalled.

But Iniesta - who won the FIFA World Cup with Spain in 2010 - refuted those claims and insisted he wanted to stay with the Spanish champions for the rest of his career.

And the midfielder has now emphasised that stance, and said he is not concerned that he has yet to put pen to paper on a new deal.

Speaking to Onda Cero's 'First Touch' show, he said: "I've said many times, it is a matter of time on these situations.

"My desire is to be there and the club wants me hence the desire of both parties is clear.

"I feel I have many good years left to continue playing at the top level and  that's what I want to do.

"I don't like to use the word negotiations in these cases. No situations are resolved in two or three months."

Barcelona top the Liga standings after winning all eight of their fixtures so far this season.