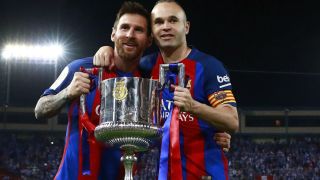 Andres Iniesta wants Lionel Messi to follow his lead by signing a new contract at Barcelona "as soon as possible".

The Spain midfielder reached an agreement with Barca for a new "lifetime" deal at the club on Friday, extending his lengthy association with the Catalan giants having joined in 1996.

His previous deal was due to expire at the end of the campaign, much like Messi's current contract, and the Argentinian has been the subject of speculation as a result.

Club president Josep Maria Bartomeu has previously claimed that an agreement has been reached with Messi and that they only need their superstar forward to sign the contract.

Iniesta is certain that Messi wants to stay and would like the announcement to be made soon.

He told reporters at a media conference: "In Leo's situation I think that dialogue is something that is not lacking.

"The club wants Leo to be here, he wants to be here. I hope that his story [at Barca] never ends.

"He is unique, we can't live without him and I think the club thinks the same way. It's just a question of time, but I hope he renews as soon as possible."

Iniesta's Barca and Spain team-mate Gerard Pique has been a controversial figure of late, with the defender attracting jeers from supporters at a recent international training session for his support of the Catalan independence referendum.

Iniesta regrets that situation, saying that nobody should be made to feel uneasy.

"I see it the way it is," he said. "It's a situation that has been looked at from every angle.

"It's a very complex and difficult to explain. Maybe two people can think two things and they end up fighting over things, but you always try to look at things rationally.

"The only thing we can desire is that everything calms down, that we can live peacefully and leave the conflict behind. That's all we can ask.

"But it's not an easy situation for anyone. We don't want anyone to feel uncomfortable."