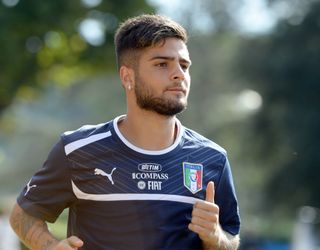 The 22-year-old winger has been in superb form for Rafa Benitez's side this season, playing a significant role in the club's rise to second on the Serie A table.

Insigne, who only broke into the first-team squad last season, said he wants to repay the club for their faith in him by spending his career at the club and becoming skipper in the future.

"I've always said that my dream is to continue playing in Napoli as long as possible and one day become the captain of the team," Insigne said.

"This is my dream and I hope I'll have the support of the club, which has always trusted me.

"I always try to do my best and I hope I'll remain with Napoli as long as possible because wearing the Napoli shirt has always been one of my dreams."

For now, Insigne's focus is on the Italian national side and their final World Cup qualifier against Armenia on Tuesday.

While the Italians have already booked their spot in Brazil, Armenia are one of four teams – with Bulgaria, Denmark and the Czech Republic – still in with a chance of winning a spot in the playoffs.

"I hope we'll have a great performance, especially for the people watching us," Insigne said.

"Many players are joining their national teams because they're having a strong performances in the championship.

"The national team's matches also hinder the managers because they can't work with the whole squad in order to get ready for the forthcoming championship matches.

"In any case, as soon as we get back to our clubs, we're available to work with our managers and want to give 100 percent when we're on the pitch."