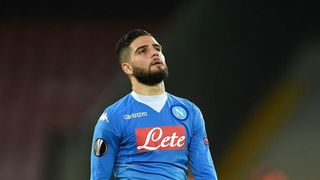 Lorenzo Insigne's preparations for Napoli's Serie A clash with Fiorentina were disrupted on Saturday when he was the victim of a mugging in Naples.

Napoli will look to get back to winning ways in Florence on Monday after failing to win their last two matches, surrendering top spot to defending champions Juventus.

Insigne, who has been an integral part of that side with 11 goals in 25 league appearances, was targeted in his home city on Saturday.

"It's true, yesterday at around 10:30pm Lorenzo was victim of a mugging in the Vomero area," the 24-year-old's agent Antonio Ottaiano told Radio Kiss Kiss. "He was amazed and shocked.

"His wife was in the car with him but fortunately not his children. Lorenzo reported the case to the authorities and the police.

"It was a negative experience. He'll get over it by means of football and the help of his team-mates."