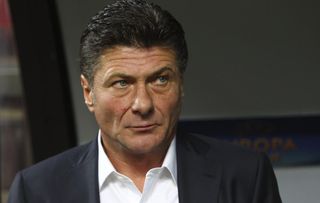 The Milan club took eight points from their opening four matches, but Mazzarri's position has come under scrutiny after back-to-back Serie A defeats to Cagliari and Fiorentina, although Inter did show spirit to twice come from behind in last weekend's 2-2 draw with Napoli.

Inter's stuttering Serie A form was mirrored in Thursday's 0-0 draw with Saint-Etienne in the UEFA Europa League and there have been suggestions that a failure to beat Cesena could spell the end for Mazzarri at San Siro.

But the 53-year-old is unconcerned by the speculation.

"If I remember rightly, there were also delicate moments last season, but I always said to focus on only the next match," he said.

"All my energy is spent on getting the players at their best for the next game. The important thing is to focus on the field. Club matters are extraneous.

"Of course we are not happy after losing to Cagliari and Fiorentina, but the renewal process can have some bumps in the road. Football is not an exact science. If everyone works in the same direction, we can soon get back to being competitive.

"Is my time running out? No, mine starts [on Sunday]. We're only a few rounds in and the process can be speeded up with points. We'll certainly try."