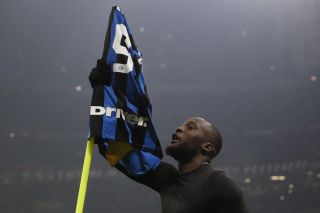 With perennial champions Juventus suffering a shock loss at Verona on Saturday, the Nerazzurri appeared to have wasted their chance to go top in the Derby della Madonnina.

Veteran Zlatan Ibrahimovic teed up Ante Rebic to open the scoring and then headed home himself to put Milan in control at the interval, only for Inter to storm back in an unforgettable second half.

Captain Marcelo Brozovic’s stunner shortly after the break had Conte’s side dreaming of a comeback that Matias Vecino, Stefan De Vrij and Romelu Lukaku wrapped up in style.

Inter finished the weekend ahead of Juventus on goal difference, with Lazio a point behind after a record-breaking result at Parma.

Goran Pandev gave Genoa a 1-0 victory against Cagliari and Gianluca Lapadula’s brace helped Lecce to a surprise 3-2 triumph at Napoli.

In Spain, Real Madrid and Barcelona both secured away victories as the LaLiga title race continued to heat up.

Zinedine Zidane’s men were sweating when Unai Garcia headed Osasuna ahead on Sunday afternoon, only for goals from Isco, Sergio Ramos, Lucas Vazquez and Luka Jovic to wrap up a 4-1 win that heaped the pressure on Barca.

Quique Setien endured a tough time against former club Real Betis but emerged victorious at the end of a thrilling encounter.

Sergio Canales’ early penalty was cancelled out by Frenkie de Jong, before Sergio Busquets levelled following a fine Nabil Fekir strike. Clement Lenglet’s header was enough to seal a 3-2 victory on a night when Fekir and Barca’s match-winner were both sent off.

Embattled Espanyol secured their first home victory of the season as Raul De Tomas’ goal saw off Mallorca 1-0 and Alexander Isak’s fine week continued as he wrapped up a 2-1 win for Real Sociedad against 10-man Athletic Bilbao.

Celta Vigo won by the same scoreline at home to Sevilla as Pione Sisto completed a late comeback triumph at Balaidos.

In the Bundesliga, leaders Bayern Munich and nearest rivals RB Leipzig fought out a goalless draw.

Hansi Flick’s men were unfortunate not to go into half-time in front at the Allianz Arena, but Die Roten Bullen returned from the break strongly and gained their first ever point at the Munich giants.

In France, Paris St Germain continued their march towards another Ligue 1 title by defeating Lyon 4-2.

Goals from Angel Di Maria and Kylian Mbappe were added to by Marcal’s own goal early in the second half. Martin Terrier and Moussa Dembele brought Lyon back into the contest, only for Edinson Cavani to settle any nerves.

Strasbourg roared to a 3-0 victory against Reims, while Andy Delort’s goal proved enough for Montpellier as they won 1-0 at St Etienne despite Junior Sambia’s sending-off.