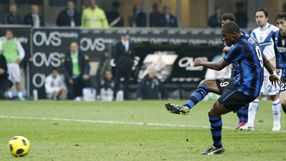 Rafa Benitez's Inter, who have drawn their last three league games at the San Siro, were easily beaten 3-1 at Tottenham Hotspur in the Champions League in midweek.

The treble winners were once again underwhelming on Saturday as memories of last May's triumphs under their former coach Jose Mourinho get increasingly hazy.

Promoted Brescia went ahead after 14 minutes when giant striker Andrea Caracciolo was allowed to collect a long ball and power through Walter Samuel's weak challenge before prodding in.

Eto'o equalised from the spot 17 minutes from time for his eight goal in 10 Serie A games this season, not to mention seven in the Champions League, after being felled by Gaetano Berardi.

Inter had several chances in the first half, including a deflected Eto'o shot that hit the bar, but they lacked conviction and ideas against a packed defence.

Benitez had been forced to start with a rare 4-4-2 formation given injuries to four central midfielders but Coutinho and Goran Pandev struggled in unfamiliar wide roles.

Only the in-form Eto'o looked to create chances while strike partner Diego Milito was muted on his full return from injury.

Inter's fitness troubles have prompted media criticism of Benitez's training methods compared to Mourinho and, although the ex-Liverpool coach has rejected the accusations, president Massimo Moratti had said he was concerned by the situation.

Right-back Maicon, given a rough ride by Tottenham's Gareth Bale for a second time in midweek, was the latest to head to the treatment room after coming off early feeling his hamstring.

World player of the year candidate Wesley Sneijder was then taken off at the break and a lack of close season signings meant young Nigerian midfielder Joel Obi had to be introduced.

The formation was not working but Benitez stuck to his guns despite puzzled looks around the San Siro and the clear penalty was his only reward as Milito blasted over in stoppage time.

Nostalgic fans, who saw hero Mourinho return to the city last week with new team Real Madrid against Milan, were shaking heads again when Samuel hurt his knee and went off in pain.

He was out for almost a year after a knee injury in 2007.

In Saturday's early game, Bologna's Marco Di Vaio and Henry Gimenez scored within a minute of each other late on to seal a 2-0 home win over fellow strugglers Lecce.