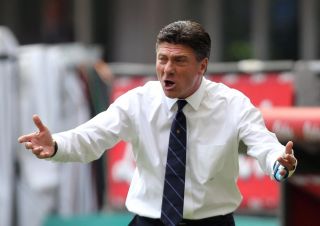 The Milan outfit started their league campaign unbeaten in their opening four matches, but have slipped to 10th following comprehensive 4-1 and 3-0 losses to Cagliari and Fiorentina in their past two encounters in Italy's top flight.

Inter's defeats have led to scrutiny of Mazzarri's position, after the club brought in several players to boost the first-team squad during the close-season.

However, Thohir has called for patience and stated that the club is instead looking at ways of further improving the playing staff, rather than considering a replacement for Mazzarri.

"Serie A is extremely competitive so we must be patient," Thohir told reporters. "We need to closely analyse the period the team is going through and we hope that the international break gives us the chance to do that.

"Mazzarri will do his best for Inter and we will give him the time he needs. He will continue to have our support. The players now need to have a period of introspection in order to prepare for the next match in the best way possible.

"We'll see what we need to do. I can't talk about what type of players in which positions we'll look to bring in. Perhaps we need another midfielder at the same level as Hernanes and [Mateo] Kovacic and also a striker who can win high balls.

"I can't say anything further because we still need to evaluate everything.

"The defence is fine and the midfield is doing well too - we have important players who are performing to a high standard, such as Kovacic, [Gary] Medel and Hernanes."