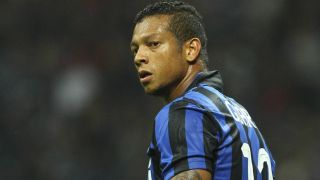 Inter sporting director Piero Ausilio has hinted at the impending exit of midfielder Fredy Guarin in the January transfer window.

Guarin is the target of Chinese Super League outfit Jiangsu Suning and they are reportedly set to offer Inter €18million for the Colombian.

The 29-year-old was left out of Inter's squad in their 2-0 Coppa Italia win over Napoli on Tuesday, prompting questions over his future with the Serie A club.

"He is still an Inter player," Ausilio told Rai Sport. “There's no point hiding, we are in negotiations, but until the documents are signed we cannot talk about a done deal. We'll see where all these negotiations take us.

“If Guarin did leave, he'd be replaced in the squad, but we'll make those evaluations later on."

Ausilio did not want to be drawn into speculation over who Inter will replace him with.

"It makes sense to link good players with Inter but that doesn't mean they're the right ones," he added.

"We're weighing up a few options with the coach but that doesn't necessarily mean it'll be a midfielder.

"I've not ruled out other names, we're keeping an eye on everything. We definitely can't sign a non-EU player."