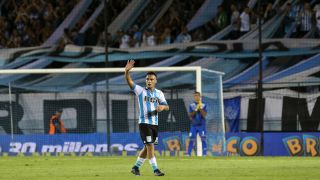 Inter target Lautaro Martinez is a similar type of player to Manchester City star Sergio Aguero and would link up well with Mauro Icardi should his expected move to Serie A go through, according to Hernan Crespo.

Racing Club attacker Martinez was heavily linked with Atletico Madrid but is widely expected to join Inter in the next year, having established himself as a rising star in Argentina's Superliga.

Still just 20, Martinez has nine goals in 13 league games for Racing this season and 11 in his last 10 outings across all competitions.

Inter's interest in Martinez has been widely reported since early February, with Racing president Victor Blanco even going as far as saying the deal is "90 per cent complete" at the start of March.

Martinez, who recently earned his first senior Argentina call-up, is expected to cost the Serie A giants about €27million and former Inter star Crespo believes his young compatriot has plenty to excite the San Siro crowd.

"He is very good and can play in many roles; on the wing, as a secondary striker or up top by himself as the main striker," Crespo told Sky Sport Italia. "He has knack for scoring and he's an intelligent guy.

"Coming to Inter isn't easy, he'll need to be helped and protected. Then hopefully he can show all of his qualities from the beginning, but it won't be a disaster if he needs a little time to settle in.

"He can play with Icardi, I don't think there will be any problems. He reminds me a little bit of Aguero in some ways, like with his low centre of gravity, but he's Lautaro Martinez."

Although Inter are enduring another underwhelming season, sitting fifth in Serie A after 27 matches, Crespo does not think fans need to panic about the prospect of Icardi – who has 18 league goals in 23 appearances – looking for an end-of-season exit.

"There aren't many better things than being a striker and also the captain at Inter," Crespo said.