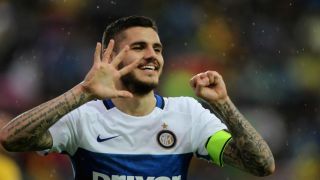 Inter intend to build their squad around Mauro Icardi and the Nerazzurri have no intention of letting the striker leave San Siro, according to Piero Ausilio.

Icardi has been linked with a move away from Inter ahead of the 2016-17 Serie A campaign, with Napoli reported to be leading the race for his signature and speculation was only intensified when the Argentine was not involved in Monday's 3-1 friendly defeat against Paris Saint-Germain.

Napoli's interest comes amid speculation Gonzalo Higuain is set to join champions Juventus, but Inter director Ausilio has warned Icardi will not be his replacement at San Paolo.

"Icardi will remain at Inter, our position is very clear," he told Fcinternews.it. "It's not a question of money, it doesn't matter what Napoli can offer us.

"Our plan this summer is to reinforce Inter and to do that we're keeping hold of Icardi and our best players regardless of the figures offered. Icardi does not have a release clause and we do not want to sell; simple.

"There's no problem between us and Icardi, he's working very hard. He has been with us for years and become captain of a team with a glorious past. We have always been attentive to his needs and always renewed his deal at the right time.

"Many people are forgetting that we have already signed three players [Caner Erkin, Ever Banega and Cristian Ansaldi] of international pedigree and will do more still."

"Icardi is very young and has great potential. He must keep thinking about playing, nothing more," he said.

"The intention is for him to stay with us. We renewed last year, adjusting the contract and giving him the captain's armband."