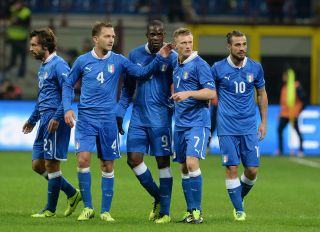 Mats Hummels gave the visitors the lead when he rose to meet a Toni Kroos corner in the eighth minute, but they were not able to give coach Joachim Low a win on his 100th match in charge.

Ignazio Abate grabbed the equaliser for Italy with low left-footed strike in the 28th minute, the Milan full-back combining neatly with Leonardo Bonucci to bring the hosts level.

Germany very nearly collected their first win in Italy since 1995 in the closing minutes, but Benedikt Howedes saw his effort crash against the post.

England fell to their first defeat at Wembley since February 2012 as an Alexis Sanchez double gave Chile a memorable 2-0 victory.

The Barcelona forward opened the scoring early with a close-range header, before doubling his tally in the closing minutes with a composed chip over debutant Fraser Forster.

Meanwhile, Switzerland saw their 14-game unbeaten run come to an end as they were beaten 2-1 by South Korea in Seoul.

Fulham midfielder Pajtim Kasami gave the visitors the lead in the seventh minute with a low drive, but Hong Jeong-Ho levelled the scores just before the hour with a close-range header.

The Sunderland defender headed home after three minutes in Olomouc, with Tomas Horava doubling their lead with eight minutes remaining.

Denmark's 2-1 victory over Norway was their 26th over their Scandinavian neighbours, however it was overshadowed by an ankle injury picked up by Christian Eriksen.

William Kvist broke the deadlock in the 14th minute with a near-post header, but a 78th-minute strike from Morten Gamst Pedersen appeared to have earned the visitors a draw.

However, Nicolai Boilesen struck his first international goal in the final minute to secure a win for Per Hogmo's side.

Elsewhere, Mevlut Erding struck in the closing minutes of the first half to send Turkey to a 1-0 victory over Northern Ireland – their fifth win of 2013 – and condemn their opponents to a fifth defeat in seven matches.

And Martin O'Neill picked up a convincing win in his first game in charge of Republic of Ireland as they beat Latvia 3-0 in Dublin.

Robbie Keane's 62nd international goal got the Irish under way midway through the first half, with Aiden McGeady and Shane Long completing the victory with second-half strikes.

Slovakia's 2-0 win over Poland in Wroclaw ended a run of three games without a win, while Estonia's 2-1 win over Azerbaijan was their first victory since June – a run of seven games.

Elsewhere, there were goalless draws between Scotland and USA and Belarus and Albania, while Russia and Serbia shared a 1-1 draw.