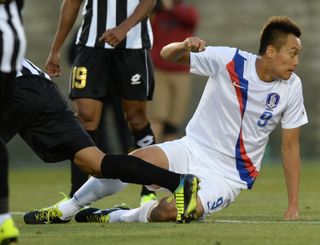 Costa Rica finished the match in Los Angeles two players short after both Christopher Meneses and Mauricio Castillo were sent off in the second half.

South Korea won the first game of their three-match tour of North America thanks to Kim's 10th-minute strike.

The 1.96m striker from Ulsan made it two goals in as many appearances for his national team after he also scored against Russia in November.

Costa Rica's chances of a comeback steadily decreased through the second half as Meneses was shown a straight red in the 68th minute before substitute Castillo received two yellows in the space of 10 minutes to be sent off with four minutes remaining.

South Korea's head coach Hong Myung-Bo has taken a K-League-based squad on a tour as he prepares for this year's World Cup finals in Brazil.

Hong's side are set to face Mexico on Tuesday at the Alamodome in San Antonio, before they will take on the United States on Saturday at the LA Galaxy's Stubhub Center.