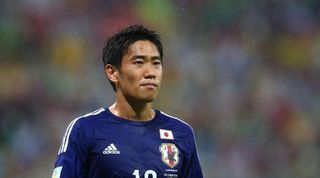 Javier Aguirre recorded his first win as coach of the Japanese national team with a 1-0 victory over Jamaica on Friday, although they had to rely on an own goal from defender Nyron Nosworthy.

Kagawa sustained a blow to the chin during the first half of that clash in Niigata, but remained on the field before being withdrawn in the final minute.

The absence of Kagawa, who featured in all three of Japan's World Cup clashes in Brazil earlier this year, will come as a blow to Aguirre, but the Mexican insisted he was relaxed following the win over Jamaica.

"I'm as relaxed as I always am," he is quoted as saying by Kyodo News. "The result did not reflect our performance.

"I think we had four clear-cut chances we didn't take. I'm pleased with the way the team clicked, but I'm not satisfied with the result.

"If we play the way we did [against Jamaica] we might have a chance against Brazil.

"We had 20 shots against Jamaica. Against Brazil we might have one - and we'll need to take that."

Brazil come into the fixture on the back of a 2-0 victory over fierce rivals Argentina in Beijing.

Diego Tardelli's first two international goals handed his side the triumph in the Superclasico de las Americas in China, and the striker will be looking to add to his burgeoning account this week.

Brazil will be encouraged by their dominant head-to-head record against Japan, having won eight of the 10 previous meetings between the sides.

The remaining two encounters have ended all square, so Japan will be keen to break their duck against the South American giants.