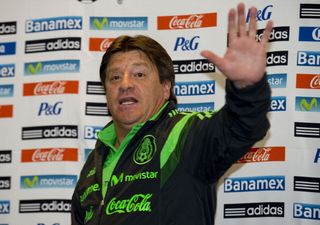 The North American nation will host fellow CONCACAF member Honduras in front of a sell-out crowd at the Estadio Zoque in Tuxtla Gutierrez, Chiapas.

Both teams featured at the World Cup, but Mexico fared remarkably better, finishing second behind hosts Brazil en route to reaching the round of 16 while Honduras failed to win a game.

Mexico have played two games since their World Cup campaign, keeping two clean sheets as they drew with Chile and beat Bolivia in September friendlies.

And Herrera is expecting Mexico to continue to improve against a Honduras side, who placed fifth at the Copa Centroamericana last month.

"We seek the best preparation to give as much as possible to our fans joy, often we succeed, sometimes it hasn't been achieved," Herrera told reporters on Monday.

"However, you cannot doubt that always, without exception, we work with one goal in mind to win, to improve, to give maximum effort."

Herrera also has an eye on next year's Copa America and Russia in four years' time, with 10 players capped nine times or less selected.

Two of those players are debutants - Atlas striker Arturo Gonzalez and Tijuana midfielder Javier Guemez - as Herrera builds for the future.

"We will do a very similar job that we did in the World Cup," he said.

"A team that is dynamic, which mark the rhythm of the game, holding the ball, you know exactly what is done in the field.

"Eliminate errors and distractions that have had the team and cost us at times."

Meanwhile, Honduras coach Hernan Medford has called for patience as he attempts to stamp his authority on the national team.

Medford only replaced Luis Fernando Suarez in July, and he guided Honduras to two wins and as many losses at the Copa Centroamericana.

"There are players who for the first time I meet and why I always say, time is the least I have and that is what I have always needed time," Medford said.