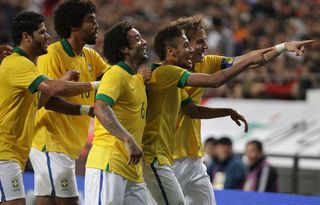 Luiz Felipe Scolari's side were far from their fluent best at the Seoul World Cup stadium on Saturday, but still managed to overcome a stubborn challenge from the home side.

After a first period devoid of clear-cut chances, Neymar lit up the game with a sublime free-kick on the stroke of half-time.

And the encounter was put beyond doubt shortly after the break as Oscar rounded goalkeeper Jung Sung-Ryong and fired into the open net.

Scolari named an attacking starting XI with Neymar and Hulk partnering Jo in a front three.

Brazil made a lacklustre start to the game and could have gone behind in the third minute when Koo Ja-Cheol fired wide from the left of the box after Ki's neat throughball.

The visitors' first glimpse of the Korean goal came when Hulk played a one-two with Jo before shooting, but his strike was smothered by Jung.

Chelsea midfielder Oscar then hit a snap shot on the turn from 25-yards that cleared the crossbar.

Brazil's failure to create clear-cut chances led to a spell of increased pressure from South Korea.

David Luiz crucially headed an exquisite Lee Chung-Yong cross away from Koo, before a surging run from Kim Bo-Kyung resulted in the midfielder firing straight at Jefferson.

But the hosts failed to make this period count and Brazil stole ahead on the 44th minute.

Neymar was felled by Lee Yong on the right and the Barcelona star picked himself up to curl a superb 25-yard free-kick into the corner on the stroke of half-time.

And Scolari’s men doubled their lead four minutes after the interval.

Oscar collected a defence-splitting pass from Paulinho and deftly beat the goalkeeper before shooting into the empty goal.

Brazil then went close to extending their lead on the hour mark. Neymar's cross caused panic in the South Korea box and Luiz Gustavo made a late run to power a header goalwards with Lee Yong making a crucial deflection.

South Korea nearly reduced the arrears from a corner with 20 minutes remaining, but Lee Chung-Yong put his near-post header wide.

Hernanes could have added a third in the dying stages, but the Lazio midfielder hit a tame effort straight at Jung from the edge of the box.

This made no difference to the result though, as Brazil built on victories over Australia and Portugal in their last two fixtures.

Scolari's men will now switch their focus to Tuesday's friendly with Zambia in Beijing.