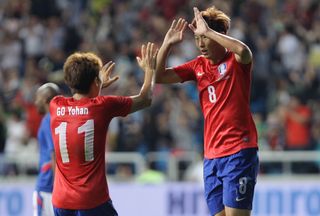 Having lost their last two games to Croatia and Brazil, the home side were behind within half an hour in Cheonan.

However, 10 minutes later, the home side restored parity, with Koo Ja-Cheol equalising from the spot.

Just a minute after the break, Bayer Leverkusen's Son Heung-Min edged his side ahead with a rising long-range effort, which left Abdoulaye Samake with no chance in the Mali goal.

Kim Bo-Kyung made certain of the points three minutes short of the hour mark - linking well with Lee Chung-Yong before finishing comfortably.

The win is only Hong Myung-Bo's second in charge of South Korea, having been appointed as head coach in June.

Mali, who missed out on qualification for the FIFA World Cup after finishing second in Group H of African qualifying, have won one of their last six games in all competitions.