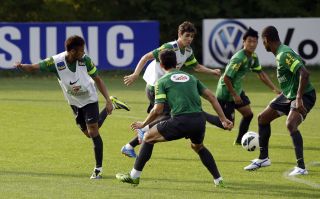 The latest stop on Brazil's world friendlies tour takes them to Asia, with Luiz Felipe Scolari sure to be keeping a close eye on the fitness of the Barcelona striker.

Neymar reportedly injured his hip after colliding with midfielder Hernanes in training on Thursday and Scolari is unlikely to take any risks with him.

The 21-year-old has scored 26 goals in his 42 appearances for Brazil and has played a key role in their superb recent form.

Brazil have won eight of their last nine matches in all competitions – which included triumph at the FIFA Confederations Cup – and they have scored 26 goals in the process.

The South Americans will play Zambia in Beijing three days after their clash with South Korea and Scolari has named a strong squad for both matches.

Neymar is the star attraction, if he plays, with Zenit's Hulk and Alexandre Pato of Corinthians likely to lead the line if he is absent.

Also included in the squad are Chelsea midfield pair Ramires and Oscar, while Liverpool's Lucas has won a recall.

Defenders Victor and Dede were also recalled, in the absence of injured captain Thiago Silva and Maicon, while striker Fred and goalkeeper Julio Cesar will also miss out through injury.

Brazil beat South Korea 3-0 at the 2012 Olympics and have posted wins in three of the four official meetings between the two countries.

South Korea have already qualified for next year's FIFA World Cup – Brazil did not need to do so as the host nation – and will use the match as an attempt to stop an alarming run of form.

Since defeating Uzbekistan 1-0 in a World Cup qualifier in June, Hong Myung-Bo's side have won just one of seven matches.

That was an expected 4-1 win over Haiti in a friendly last month, which was swiftly followed by a 2-1 defeat against Croatia.

South Korea have failed to score in four of their last seven matches and Hong is hopeful his side can respond on the big occasion.

"It's a very rare and lucky opportunity to play against team like this," Hong said.

"Brazil is the host nation of the World Cup and will be the team to beat at the tournament so we have to prepare well and try to achieve a good result."