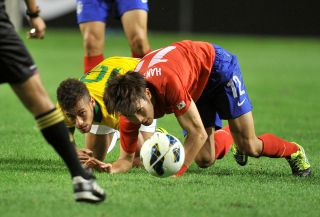 Hong Myung-Bo's men suffered a respectable 2-0 loss to Brazil on Saturday, a month after being beaten by Croatia.

They will avoid underestimating Mali but should find life easier when they meet at Cheonan Baekseok Stadium.

In front of what is likely to be a vocal home crowd, South Korea should be targeting goals after failing to score against Brazil.

Hong was disappointed with the result against Brazil and said his team needed to improve on the counter-attack.

"I'm sorry we could not reward the crowd, who filled the stadium, with a victory," he said.

"It's disappointing to concede and not to score, but our performance was not bad. The second goal was our mistake but we can learn from that.

"We were not quick enough on the counter, but Brazil are a very strong team so we were unable to play as we would have liked."

South Korea's squad is made up of players mostly from the K-League and European leagues and a mixture of youth and experience.

The midfield battle will be intriguing with Han Kook-Young and Ki Sung-Yueng likely to come up against the likes of Aston Villa's Yacouba Sylla and Seydou Keita (Dalian Aerbin).

Mali, who have placed third at the past two Africa Cup of Nations, have missed out on a spot at the World Cup, while South Korea qualified.

Amadou Diallo's men are winless since March and a trip to South Korea could be too much, up against a side gearing up for Brazil 2014.

Brazil star Neymar labelled the South Koreans 'physical' after the friendly, but the hosts are unlikely to target any Mali players in the same way.