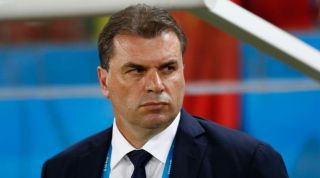 Despite receiving several plaudits for their plucky performances at this year's World Cup, Ange Postecoglou's side ultimately lost all three matches at the Brazil showpiece.

And heading into last month's friendly against Saudi Arabia, they had not won in their seven matches this year - losing six of them.

Despite leading the Saudis 2-0 after six minutes, the Socceroos still made tough work of their 3-2 win at Craven Cottage in London, conceding twice in the last 20 minutes.

Attacker Tommy Oar believes they must remain on the front foot at all times if they are to pick up regular wins, telling FFA TV: "Looking back at that game we let them back in having been a few goals up and that's obviously disappointing.

"The way the boss likes to play is an attacking style and we have to keep taking the game to the opposition.

"Once everyone buys into that system we'll be a lot stronger and formidable opponent."

Australia's record goalscorer, Tim Cahill, is expected to lead the line after a tumultuous week in the United States.

Cahill - who was given a straight red card just three minutes after coming on as a substitute in the New York Red Bulls' 1-0 win over the Houston Dynamo on Saturday - courted controversy after declaring his primary interest was to play for his country.

The MLS does not stop for international breaks, meaning Cahill will miss his side's clash with Toronto FC this weekend.

Bayer Leverkusen's Robbie Kruse - Australia's player of the year in 2013 - recently returned from a serious knee injury and will hope for some game time to press his case ahead of next year's Asia Cup.

Australia will host the event, to be played in January, and Friday's friendly - and Tuesday's clash against Qatar in Doha - will form a crucial part of their preparation.

Just one uncapped player, Sydney FC's Bernie Ibini, is in Australia's squad, while Joshua Brillante, Chris Herd, Massimo Luongo, Trent Sainsbury and Brad Smith will all be keen to take their chance.

Like their opponents, the UAE are in the midst of a new era and coach Mehdi Ali will look for a morale-boosting result against the Socceroos.

The UAE crashed out in the penultimate round of qualifying for the World Cup, leading to the demise of then-coach Strecko Katenac, but Ali's arrival has instilled confidence in his players.

They will miss star midfielder Omar Abdulrahman with a knee problem on this occasion.

Ali has turned to Saeed Al Kathiri - who scored four goals in the recent Asian Games - in a bid to bolster his attack.

The UAE have drawn three successive friendlies, against Norway, Lithuania and Paraguay, but they have only won once since November.