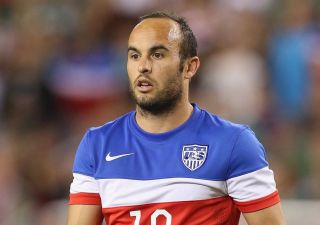 The 32-year-old was surprisingly left out of the squad to travel to the World Cup in Brazil, and had to watch on as Klinsmann's men qualified from their group before being knocked out by Belgium in the last 16, going down 2-1 after extra-time.

Friday's clash at Rentschler Field in Connecticut will mark Donovan's 157th and final appearance for his country, as the forward bows out after a 15-year international career.

Donovan, who with 57 goals is the country's all-time leading goalscorer, will wear the captain's armband and play half an hour before departing.

As well as a chance for Donovan to earn a rousing reception, Klinsmann sees the game as an opportunity to look at the rest of the players in the squad, with another friendly against Honduras to come on Tuesday.

"Obviously, it's going to be a special night on Friday as everyone in the U.S. Soccer family will have the chance to honour the amazing career of Landon Donovan," he said.

"We look at these two games as an opportunity to take a picture of the player pool as it stands now.

"Already the hierarchy starts to shift in some ways, which is normal at the beginning of a cycle. We are excited to look at this group against a very competitive team like Ecuador, and then we will have a chance to bring some different faces for the game against Honduras."

Ecuador parted company with Reinaldo Rueda after failing to progress beyond the group stage in Brazil and appointed Sixto Vizuete on an interim basis until January 2015 - his second stint at the helm.

The South American nation thumped Bolivia 4-0 in Vizuete's first game in charge last month, before going down 1-0 to Brazil, and the 53-year-old has announced his intention to see out his deal.

"I am doing my job," he said. "What happens in January is another thing. I have not spoken with anyone.

"We are looking to the United States and El Salvador [on Tuesday]. Hopefully we can give another joy to the Ecuadorian people. I will fulfil the commitment I have."