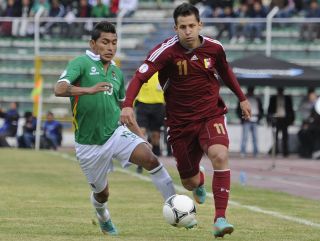 Rudy Cardozo levelled just moments later with a cracking free-kick before the teams traded goals in the second half.

Jose Chavez had put Bolivia ahead for the first time in the 71st minute, but his effort was cancelled out by substitute Yohandry Orozco late on.

Venezuela sit sixth in CONMEBOL World Cup qualifying for Brazil 2014 and face crucial matches against Chile and Peru in September.

Cesar Farias' men are aiming to finish ahead of Uruguay and secure the play-off place in South America.

Bolivia are second bottom and unlikely to qualify ahead of clashes with Paraguay and Ecuador.

The hosts made a strong start and took the lead through FC Thun attacker Martinez.

The 20-year-old used his pace to get in behind the Bolivia defence and, after beating two defenders on the left side of the area, placed his finish into the bottom corner.

But their lead did not last long, with Bolivia back on level terms thanks to Cardozo.

The Bolivar midfielder curled in a delightful 25-yard free-kick past a helpless Daniel Hernandez to make it 1-1.

Chavez looked to have won the encounter for Bolivia with 19 minutes remaining, but Orozco, introduced in the 62nd minute, ensured the spoils were shared with his effort three minutes from time.