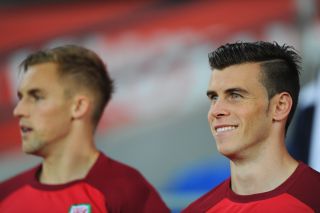 Despite Wales (44th) sitting 19 places ahead of their opponents in the FIFA world rankings, the head-to-head record between the sides points towards this being a tight encounter.

Of the 11 matches to have taken place in history, the nations have four victories apiece with the remainder ending all square.

But Finland have had the upper hand in recent years, and won both of the nations' last encounters in qualification for the 2010 World Cup. Wales' last victory, meanwhile, came in Helsinki in 2002.

Chris Coleman's men picked up an impressive 1-1 away draw with Belgium in their last game - the final fixture of their failed qualification campaign for next year's World Cup - while Finland were well beaten by France in a 3-0 defeat.

However, that loss was just the Finns' second in eight matches, with the other being a 2-0 home reverse to reigning world and European champions Spain in September.

Neither country managed to book a place at Brazil 2014, so this fixture will be more about preparing for UEFA Euro 2016 qualifying for both managers.

And home captain Ashley Williams hopes the fixture can prove the spring board for a successful campaign.

"The way we’ve got to approach it after we didn’t qualify for the last one is that we’re looking at a fresh tournament now," he told Wales Online.

"This is the start, the first friendly before the next tournament, and I’m sure we’ll do some talking when we meet up - where we want to go and our plan for qualifying for the next Euros."

Wales manager Coleman, who suffered a raft of withdrawals ahead of their final two qualifying matches, has only had to deal with three this time around, with Boaz Myhill (Achilles), Andrew Crofts (groin) and David Vaughan (hamstring) pulling out.

That opened the door for Jack Collison, Owain Tudur Jones, Danny Ward and Emyr Huws to come into the fold, with the latter two hoping to make their debut for the senior team.

Another boost for Wales will be the return to first-team action of Real Madrid's Gareth Bale, who did not feature in the last international break due to injury.