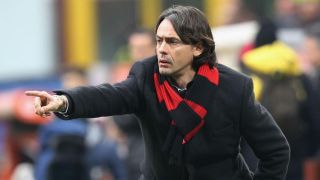 The triumph kept Milan within five points of the UEFA Europa League places and Inzaghi, who has come under much pressure following Milan's recent results, is eager for them to build on the success.

"We played well, but we know there is still a long way to go," Inzaghi said.

"We have to continue on this path. A positive result gives us more self-confidence, but we must improve and we know that.

"We have to be consistent now in our results. We're Milan and with this attitude and confidence we can get back on track."

Midfielder Andrea Poli echoed his coach's sentiments and was keen to stress the importance of every game as they seek to seal a European place.

"We did very well in the first half, we're satisfied. I want to win with Milan and with commitment we can do well," Poli said.

"When the results don’t arrive we are the first to be responsible. We all have to give more, me first of all. We want to fight for the European places. We're Milan and we have 14 matches available. Every match will be like a final."