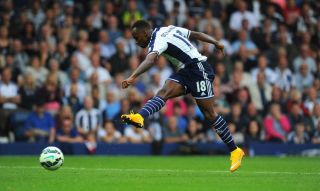 Berahino, 21, was tipped for an England call-up, only to be overlooked by manager Roy Hodgson on Thursday.

He is the top English goalscorer in the Premier League this term with four, and Irvine said he would welcome interest from other clubs in Berahino if he continued delivering for West Brom.

"If Saido gets to the stage where there's a while load of big clubs chasing after him - then he'll have done a brilliant job for us in the meantime," Irvine said.

"Then it becomes a matter of whether the club want to do business with anyone or not. There's no set rule as far as that’s concerned.

"The club will make the decision on any player who's attracting attention from other clubs.

"As we've shown already this summer, we've kept hold of some players who other clubs were chasing - but we let others go.

"It'd depend on the nature of anything that happened down the line."

Irvine said there were no guarantees West Brom would sell Berahino, but the club would like to see any move guarantee he was going to the "next level".

"I certainly wouldn't want Saido not to play well because I didn't want him going anywhere else," he said.

"It's in everyone’s best interests that he continues to play as well as he's been playing - and continues to develop.

"And if in the end he goes somewhere else - and it's a move that is seen as taking his career to the next level, then that'd be fantastic and he'd go with our blessing.

"So the message is to carry on playing well and scoring loads of goals - if he does that we'll all be happy."