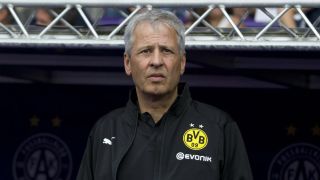 Borussia Dortmund's new head coach Lucien Favre got off to a winning start thanks to a 1-0 pre-season defeat of Austria Vienna on Friday.

Alexander Isak scored the only goal late in the first half for Dortmund, who were without their World Cup stars for the first game of the Favre era.

And the former Nice coach was not getting carried away.

"It was okay," Favre said. "It was a test match with two completely different teams after half-time, with many young players at the age of 18, 19 years.

"It's a lot to do. We still have a lot of work to do. The players were only ready for a half.

"We had clear chances in the first half but also in the second half."

Dortmund will next be in action on June 21 in the International Champions Cup, Favre's men taking on Premier League champions Manchester City before games against Liverpool and Benfica.