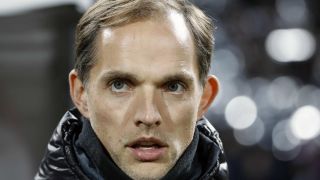 Adrien Rabiot is unavailable, having been banished to the reserves due to a contract stand-off, and Marco Verratti is sidelined by a sprained ankle.

Dani Alves filled in as a makeshift midfielder as PSG thrashed Guingamp 9-0 in Ligue 1 on Saturday, while fellow Brazilian defender Marquinhos has also featured in the role.

With PSG set to face Manchester United in the last 16 of the Champions League next month, Tuchel wants to add to his midfield options before the transfer window closes with Napoli's Allan and Watford's Abdoulaye Doucoure reportedly on his wish-list.

"It's January 21 and we have needs," Tuchel told reporters ahead of a Coupe de France clash at home to Strasbourg on Wednesday.

"We lost Adrien Rabiot, Lass Diarra and Marco Verratti, the situation has not improved.

"We have recovered Dani Alves in this role but it is very, very serious for us. Who do I want? Yeah, yeah, I know. Unfortunately I cannot tell you!

"Julian Draxler has the quality to play with us because he can adapt and he is very, very reliable in many positions.

"Dani Alves will play in the middle against Strasbourg, with his quality and mentality he has done incredible workouts. Draxler has a more offensive profile than he and Marquinhos.

"I have already talked a lot about Adrien and this subject. I can only repeat that it's a thing between the club and him."

This morning @TTuchelofficial spoke to the press ahead of tomorrow's game: "It will be too soon for @kimpembe_3 and @layvinkurzawa is sick." #PSGlivepic.twitter.com/v4wcIxPzhf— Paris Saint-Germain (@PSG_English) January 22, 2019

PSG are already out of the Coupe de la Ligue and Tuchel told his players to expect a tough challenge against Strasbourg at the Parc des Princes.

Strasbourg are fifth in Ligue 1 and held PSG to a 1-1 draw at home when they met in the league last month.

"This is the second-best attack in Ligue 1, they are also very strong in the defensive game, they are in a phase with four wins in a row away," Tuchel said.

"It has been experienced there [in Strasbourg] that they are very serious and aggressive. It was very difficult to have opportunities and score.

"It's a big challenge to play against Strasbourg. We must play at a top level."