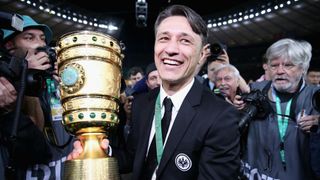 Niko Kovac smoothed relations with new club Bayern Munich as he admitted the Bundesliga champions should have been awarded a stoppage-time penalty to deny his Eintracht Frankfurt side DFB-Pokal glory.

Frankfurt, led by Kovac for the final time, ran out 3-1 winners in Berlin, but only after Javi Martinez appeared to be denied a clear spot-kick when fouled by Kevin-Prince Boateng in a frenetic conclusion to the game.

Mijat Gacinovic went on to score a third for Frankfurt, but Kovac had no problem acknowledging that the team he will leave behind were fortunate against his future employers.

"Kevin went to clear the ball but hit his foot," Kovac told ARD. "I think we were lucky. It was a penalty kick."

The departing Frankfurt coach still found time to celebrate the victory, though, describing it as a "beautiful story".

"Football provides the most beautiful stories," he said. "I'm happy for the club, for the fans and for the team.

"We stood here before the game and discussed it. When you're together, you can do anything, be it in sports or in society. That is what has happened with this team that has always worked hard for success.

"I want to thank all of those who have supported us. Of course I am happy about the title, but I am sad to be leaving."

"That was in the heat of the moment," he said. "I would have given the penalty. It's clear the referee did not see it. He cuts his feet off in the area.

"It's a clear penalty. It does not help to talk about it but, for me, it's clear."