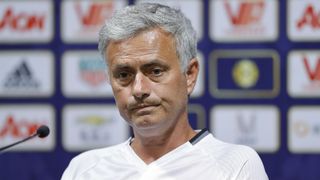 Jose Mourinho thinks the difference between Borussia Dortmund and Manchester United in Friday's International Champions Cup encounter was akin to the gulf in quality in Formula One and Formula Three.

The Portuguese was handed his first loss as United manager as the Red Devils were thrashed 4-1 by a clinical Dortmund side in a difficult evening in Shanghai.

Dortmund had played four matches already in pre-season and the difference in energy and efficiency was notable as two goals for Gonzalo Castro, a penalty from Pierre-Emerick Aubameyang and Ousmane Dembele's fine solo effort put United to the sword. Henrikh Mkhitaryan's goal against his former club rendered a mere side note.

But Mourinho refused to put too much emphasis on the result of the match, pointing to the fact United still have eight players unavailable due to their Euro 2016 commitments.

Using a quirky motorsport reference to explain the difference with Dortmund, Mourinho said: "I don't think I can analyse them [the players] with such difference in preparation. It was like F1 against F3.

"They are much sharper, so it is difficult to judge. The quality and mentality and personality is there.

"[It's been] 10 days of work. People are really tired, we played against high-quality opposition. It is unfair to make any decision. Day by day they are starting to win my trust.

"The reality is even in this situation we have six players still in Europe, plus [Wayne] Rooney and [Chris] Smalling who are only training.

"That is eight not involved. Obviously some are not going to stay in the squad and it will be different than it is at the moment."

He added: "My thoughts are simple. I know in pre-season the team in the advanced stage of preparation looks better. It happens year after year.

"It was too obvious. We knew after 10 minutes that one team started training a month ago and played four games.

"In the second half it was better. I think 3-2 was more natural than 4-1. They showed good quality and are at an advanced stage."