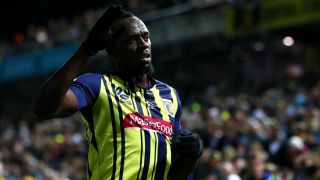 Melbourne Victory recruit and former Japan star Keisuke Honda is relishing the possibility of facing Usain Bolt in the A-League this season.

Sprint king Bolt is in Australia, where the eight-time Olympic champion is on an "indefinite" trial with the Central Coast Mariners as the 32-year-old attempts to fulfill his dream of playing professional football.

Bolt made his debut for the Mariners last week, coming off the bench in the team's 6-1 victory over a Central Coast Select XI in Gosford, and Honda is excited about a potential showdown with the Jamaican great.

"I didn't know when I signed with Melbourne Victory," Honda told reporters in Phnom Penh, where he is helping Cambodia's national team as general manager.

"It would be awesome if I can play against him."

Former AC Milan attacker Honda, who joined Victory after representing Japan at the World Cup in Russia, agreed to take on a management role with the Football Federation of Cambodia days on from his move to Melbourne.

Away on international duty with Cambodia, the 32-year-old said: "I want to contribute all my experience to the Cambodian national team.

"My mission is to change Cambodian soccer right now... but of course that's not easy."