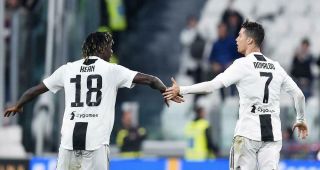 Anti-discrimination charity Kick It Out has labelled the Italian Football Federation’s decision not to punish Cagliari after their fans racially abused Juventus’ Moise Kean as “disgraceful”.

Kean, along with Alex Sandro and Blaise Matuidi, was subjected to monkey chants in their Serie A match on April 2.

The 19-year-old striker reacted to the abuse by celebrating in front of the home fans after scoring the second goal in Juve’s 2-0 win.

Kean’s team-mate Leonardo Bonucci criticised him for his reaction, saying he should take some of the blame for the abuse, but later claimed he had been misunderstood. His comments were widely condemned.

After a six-week investigation, which took in reports from Cagliari Police and the Federal Prosecutor’s Office, the FIGC announced in a statement on Tuesday that it would not sanction Cagliari as the chants, “although certainly censurable, had an objectively limited relevance”.

“Racism will never be kicked out of football while decisions like this continue to take place – @FIGC should hang their heads in shame.”