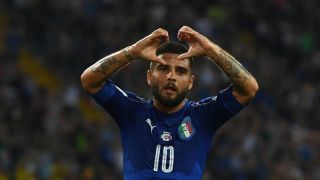 Giampiero Ventura's men rarely had to get out of first gear against Liechtenstein, who lost their 10th consecutive World Cup qualifying match despite holding firm for 35 minutes in Udine.

Insigne broke the deadlock for the hosts with his third international goal, smashing a superb volley in off the post after creating a chance for himself out of nothing.

The Napoli forward then set up the second goal for Italy shortly after half-time as reported Manchester United and AC Milan target Belotti timed his run on to the throughball to bend a clinical finish past Peter Jehle.

Eder came off the bench to add the third with 16 minutes remaining, neatly finishing off a flowing one-two with Belotti, and two more substitutes completed a comfortable victory for the Azzurri, Federico Bernardeschi beating Jehle with a powerful drive and Manolo Gabbiadini turning home Leonardo Spinazzola's low cross.

The win means Italy and Spain remain locked together at the top of the group with 16 points from six games and they meet in a crucial contest in the next round of fixtures in Madrid in September.

Antonio Candreva crashed home a sweet volley in just the second minute, but the assistant referee incorrectly ruled that the Inter winger was offside.

Ciro Immobile was then denied by Liechtenstein goalkeeper Jehle with his first sight of goal from just inside the box.

Italy's front four were struggling for cohesion, although Candreva's low cross flashed just in front of Immobile before Insigne wasted a clear view of goal by firing at Jehle.

That warning shot appeared to wake the Azzurri up as the opener arrived in stunning fashion 10 minutes before the break.

The impressive Spinazzola crossed for Insigne, who controlled the ball, chested it down and volleyed a sensational strike across Jehle and into the top-right corner via the post.

Insigne then turned provider for Italy's second goal five minutes into the second half. The Napoli forward sent Belotti through on goal and the in-demand forward made no mistake with a simple finish to beat Jehle.

Immobile had scored in his last three qualifiers but he continued to be frustrated as he saw a shot rebound off Jehle's left-hand post.

Belotti set up substitute Eder for a tap-in after 71 minutes but again the offside flag was raised - this time correctly - although the same combination then provided the third.

Eder sent Belotti spinning into the right channel and timed his sprint into the box perfectly to toe in a volleyed finish from the Torino striker's cross.

Bernardeschi lashed in a fine long-range drive to add a fourth with eight minutes to go and Ventura's third change also ended the evening on the scoresheet, Southampton striker Gabbiadini tucking away Spinazzola's centre.