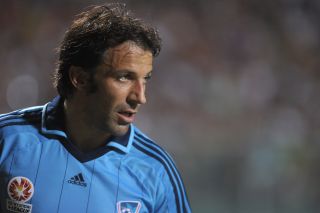 Del Piero, 38, has not played for the Italian national team since 2008 and now plys his trade in the Australian A-League, but manager Prandelli insisted that he was still in his plans for Brazil 2014.

He admitted that the experienced forward, who has scored 14 goals in 21 games for Sydney, could be a useful tool during the tournament, and also left the door open for Totti and Antonio Di Natale.

"In March and April we will have a look at the condition of certain players like Francesco Totti, Antonio Di Natale and even Alex Del Piero," he told Sky Sport Italia.

"At that stage I don’t need to plan, but build the strongest team possible.

"We are following all players who can make a difference, Alex still has a great desire and we have to keep an eye on everyone."

The 55-year-old also warned his goalkeeper and captain Gianluigi Bufffon that he needed to maintain his form as other contenders for the number one spot continue to perform well.

"Buffon, with me in charge of the side, has always been and will continue to be the number one," he added.

"However, at the same time, he has to keep a look out over his shoulder because Lazio’s Federico Marchetti and Salvatore Sirigu of Paris Saint-Germain are growing a lot.

"The first has re-found his consistency and security, while the second is maturing thanks to some important experiences in Paris."