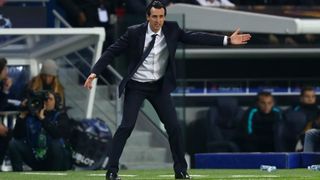 Paris Saint-Germain boss Unai Emery has spent the past week talking extensively to his players as he attempts to rally them for one final title push.

Sunday's ill-disciplined 3-1 defeat at Nice not only saw them slip three points behind leaders Monaco having played a game more, but also allowed their third-placed opponents to move within three points of the big-spending capital club.

Emery's men take on rock-bottom Bastia at the Parc des Princes on Saturday with the Spaniard spending much of the past seven days engaging the squad to try to work out what went wrong at the Allianz Riviera.

"When you lose an important game the frustration is high, but we have talked a lot," he said. "We have the mindset to take up the challenge.

"This week the team has worked well. We still have a little chance [of the title] so we will still play for it."

Thiago Motta and Angel Di Maria were both sent off against Nice as PSG fell apart and will miss the game at the weekend, as will Presnel Kimpembe.

Emery added: "I have seen Motta and Di Maria about what happened. They are aware that there are things to learn, you have to keep control of your frustration.

"I saw a few of the players to discuss the game and then I saw them collectively. The most important thing is to maintain our mentality, our concentration. And on Wednesday and Thursday, I saw a team invested and working hard every day."

PSG have been linked with a close-season move for Monaco's teenage sensation Kylian Mbappe, but Emery refused to fuel the fire, adding: "The club may need a few players to progress, but I am very happy with our squad.

"Most of the players that have had success with PSG are already here in the group."