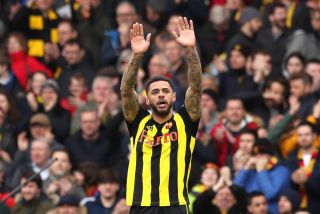 Andre Gray maintains Watford have what it takes to secure seventh spot in the Premier League before finishing the campaign in the FA Cup final.

The Hornets produced a memorable comeback from 2-0 down to beat Wolves after extra time in last weekend’s semi-final, and secure a return to Wembley against Manchester City on May 18.

Before then, Javi Gracia’s side have six Premier League games to focus on, starting against Arsenal on Monday night.

With matches in hand on the sides above them, and a home showdown with Wolves – one of their main rivals for seventh spot – also coming up, Gray believes Watford can kick on over the run-in.

“We have set a record for the club now and there’s a lot more points to play for,” Gray said on his club’s website.

“We want to finish as high as we can and try to get that seventh spot.

“It’s in our hands – and we’ve still got to play Wolves again.

“People talk about our season in terms of the FA Cup, but I don’t think you can look past our league form and what we’ve done.

“We’ve been unlucky against a lot of the big teams, but we’ve got two of them (coming up) including Arsenal and Chelsea, and hopefully we can put that right.”

Watford have impressed under Gracia, who recently signed a contract extension.

“What we’ve done this season is against all odds really,” Gray said.

“I think we were tipped for relegation at the start. No-one believed in us, but having the manager in from the start, we knew what to expect.

“We were just taking on his ideas throughout pre-season, then we started the season really well. We’ve had that belief ever since.”